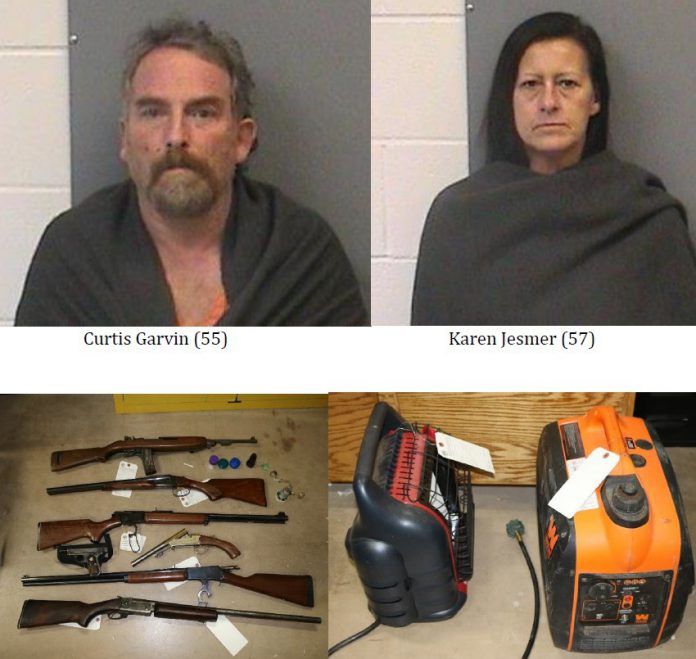 Navajo County Deputies have responded to burglary investigations not only at residential houses and businesses but campers and hunters’ campsites as well. On October 22, 2020, a Navajo County Deputy was dispatched to a trailer that had been burglarized off Pinedale Rd near milepost 3. Multiple items were reported stolen including a rifle, a propane heater, clothing, camping equipment, and a generator. A total loss of approximately $2,100.00. The responding deputy collected a backpack, which was left behind by the suspect/s inside the trailer along with other pieces of evidence. On December 7, 2021, MCAT Detectives were assigned the case for follow up. After reviewing evidence, Detectives were able to identify a suspect who was later arrested on unrelated charges. Detectives interviewed the suspect and obtained information on who committed the burglary and who they sold/traded the stolen property to. Detectives drafted and obtained a search warrant for a residence near the 2600 block of Maplewood Lane in Aripine reference this burglary.

On February 4, 2021, MCAT Detectives, NCSO Deputies along with DPS and ACSO, executed a search warrant. During the execution, Karen Jesmer (57) and Curtis Garvin (55) both of Aripine, were detained. Through the investigation, it was learned that both subjects were prohibited possessors. While searching the property, the stolen generator and heater were both recovered. Detectives also recovered firearms, 3 grams of Methamphetamine, and multiple items of drug paraphernalia. Karen and Curtis were transported and booked into Navajo County Jail on the following charges: Trafficking in Stolen Property, Possession of Stolen Property, Possession of a Dangerous Drug, Weapons Misconduct by a Prohibited Person, and Possession of Drug Paraphernalia. Sheriff Clouse would like to remind local residents and visitors to please mark your property and record serial numbers to your firearms, electronic devices, generators, and other valuable property. “Having this information helps in our investigations to not only locate it but bring those to justice who stole it from you. Burglaries use your property to sell or trade it with others for drugs and other stolen property. Nobody likes a thief and our Deputies are always working hard to recover your property that was taken by somebody who felt they needed more than you. So please help us by keeping good records of your property. We warn those who continue to steal from residence, vehicles, and campsites we are coming after you and you will be caught”.

COWSILLS - The Rain, The Park And Other Things