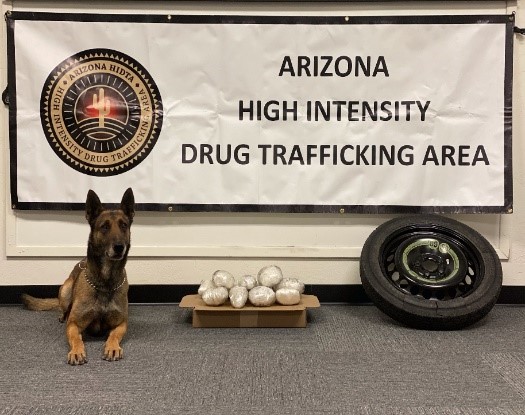 On March 21, 2021, at about 1:17 pm, a Sergeant with Navajo County Sheriff’s Office Criminal Interdiction Unit conducted a traffic stop for several traffic infractions on Interstate 40 at milepost 273 in the Joseph City area. After further investigation, the Sergeant deployed K-9 Zolton for a vehicle sniff and he alerted on the vehicle. A probable cause search of the vehicle revealed 18.7 grams of Methamphetamine that was located in the passenger’s belongings. Evidence of drug sales was also discovered. Major Crimes Apprehension Team (MCAT) arrived on scene and assisted in furthering the investigation. The vehicle was transported to the Navajo County Sheriff’s Office for further investigation which revealed 11.2 pounds of methamphetamine located inside the spare tire. The estimated street value for all Methamphetamine is approximately $400,000.00.
Michael Nathan Witt (49) and Christina Renee Homelius (25) both of Florida, were arrested and booked into the Navajo County Jail for Dangerous Drug Transportation, Dangerous Drug Possession for Sale, and Dangerous Drug Possession. They are currently being held on a $50,000.00 bond each.
Sheriff Clouse stated: “A big thank you to Zolton and his handler for this outstanding police work. Zotlon has continued to make tremendous seizures and supporting our mission of removing these dangerous drugs from our county.”