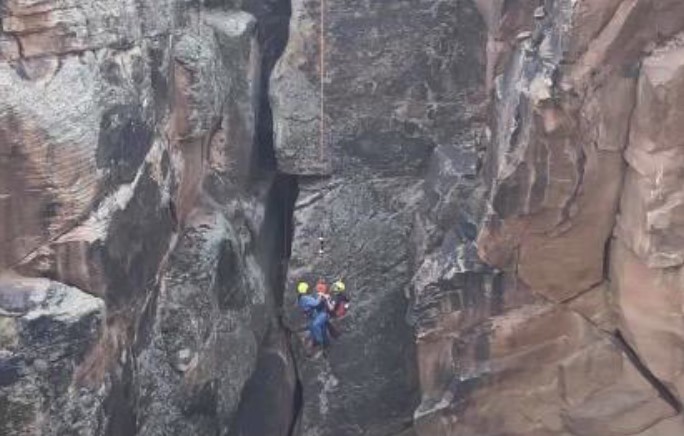 On July 13, 2021, Navajo County Sheriff’s Office Dispatch Center received a 9-1-1 call reporting two individuals had fallen near the Chevlon Bridge off Territorial Road. When Deputies arrived, they located the two male subjects stuck in a crevasse along the creek.
It was learned that four individuals, all from Leupp, AZ, were at the bridge when the 34 year old male decided to jump into the creek from the bridge. Two of the other males, a 28 and 32 year old, attempted to climb down to assist their friend when they fell down and got stuck. A Navajo County Sheriff’s Deputy climbed down the cliff in an attempt to perform first aid and rescue efforts. Joseph City Fire personnel, Coconino County Search and Rescue, and AZDPS Air Rescue conducted the rescue and recovery.
The 32 year old, was injured and later succumbed to his injuries. The 28 year old was flown to a medical center for critical injuries. The 34 year old male was taken to a local hospital for evaluation for minor injuries. The 55 year old was not injured.
Thank you to our partnering agencies Arizona Department of Public Safety Air Rescue, Joseph City Fire and Medical, Action Medical, Coconino County Sheriff’s Office Search and Rescue, and Guardian Air for the assistance in this matter.