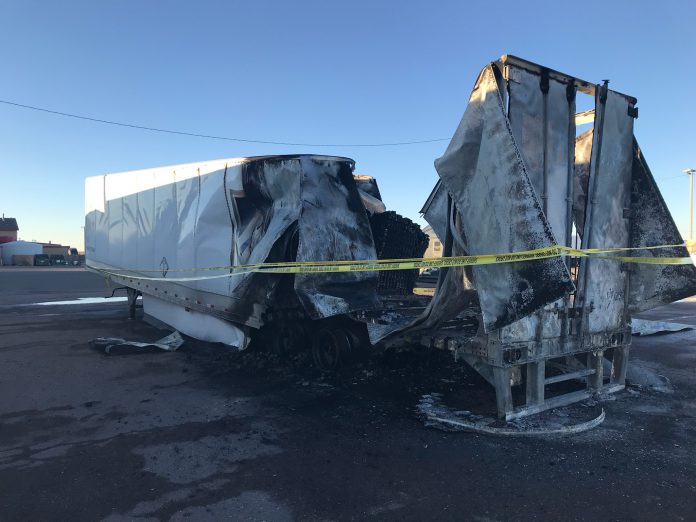 On March 1, 2022, at approximately 3:16 am, Navajo County Sheriff’s Office Dispatch Center received information of a fire at the Hopi Travel Plaza, at milepost 292 off Interstate 40. Deputies arrived at 3:23 am, with fire personnel responding close behind. Between Sun Valley Fire Department and Holbrook Fire Department, the fire was contained to the rear portion of the trailer. Fire personnel responded quickly, extinguishing the fire within minutes.
The driver was alerted while he was in the sleeper berth, he was able to disconnect the tractor from the trailer. Another commercial vehicle that was parked adjacent, received minimal damage, but the truck is still operable.
Navajo County Sheriff’s Office Criminal Investigations Unit responded. The Detectives that were on scene are classifying the fire as suspicious. The Sheriff’s Office has reached out to the Bureau of Alcohol, Tobacco, Firearms, and Explosives (ATF), for technical assistance in investigating this incident. There were no injuries reported. This is still an active investigation and no further information will be released at this time.