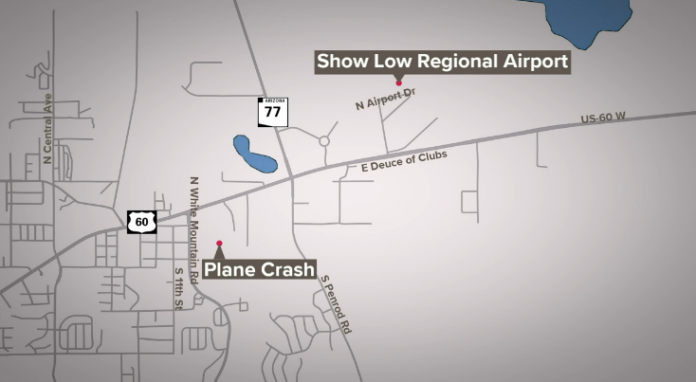 One person has died and another is in critical condition after a small plane crashed in Show Low on Wednesday, according to the Timber Mesa Fire and Medical District.

Officials said around 6 p.m., Timber Mesa Fire and Medical and the Show Low Police Department responded to a report of a small aircraft that had crashed in the meadow near Show Low Creek south of 18th Place.

Emergency crews provided medical treatment to the two passengers on board the plane, but one passenger succumbed to injuries on scene. The other passenger is in critical condition, officials said.

The Navajo County Sheriff’s Department said that while responding to the crash, one of their deputies was involved in a two-vehicle crash. Sheriff’s officials said the deputy received minor injuries, while the other parties involved were not hurt.

“I was getting dinner tonight, over at the Sonic, when all of a sudden all I heard was a boom,” said Tiffany, who was half a mile away from the plane crash scene.

“The Timber Fire company, all their ambulances and fire trucks, and all the Show Low Police Department were all Code 3 with their lights and sirens going.”

“As I made my way leaving the Sonic, you could see black smoke near where the McDonald’s was and I was like ‘oh that’s not good,’” Tiffany said.

Tiffany said she found out hours later the loud noise she heard and the smoke she saw was a deadly plane crash.

“It’s shocking to know what that noise was,” she said.

A Navajo Country Sheriff Deputy also crashed in route to the plane crash.